Bats with a hollow barrel have a trampoline effect which can improve bat performance. The following explains some of the technologies used to improve this effect, and a test method used to compare barrel stiffness.

The response of hollow and solid bats is similar in many respects. A notable exception involves the deformation of the barrel in the vicinity of the ball impact. This is often referred to as the trampoline effect and was discussed above in Ball Compression. The contribution of the trampoline effect is limited by the strength of the barrel. It is for this reason that many high performing bats have relatively low durability and why bat manufacturers are keenly interested in stronger materials.

Multi-wall bats were introduced in the 1990’s to increase both performance and durability. To illustrate how this occurs, consider two simply supported plates impacted by a ball at their center as depicted on Fig. 12.1. The plate on the left is solid, while the plate on the right has the same total thickness, but is made up of two un-bonded plates, each of thickness t/2. It is clear that the solid plate is stiffer than the layered plate (4 times) and would produce a slower rebound ball speed. Interestingly, the maximum stress would be the same in the solid and layered plates. If the total thickness of a multi-wall bat is slightly higher than a single wall bat, both durability and performance can increase.

Because of the large effect that the barrel has on bat performance, simplified tests have been considered to describe its contribution. One method, termed barrel compression, has received interest and is described in Fig. 12.2. Steel cylinders of approximately 2 inches in diameter are brought in contact with the barrel. The barrel compression is the force required to radially displace the barrel 0.05 inches in this configuration.

While bat performance is strongly affected by barrel compression, it is only one component of many. It is not clear, for instance, where along the length of the barrel it should be measured. Handle flex, MOI, and rate effects can also distort the comparison. For this reason barrel compression is typically used with a relatively large tolerance. It is nevertheless useful for quality control when comparing bats of the same model. It has also been used to identify doctored bats as will be described below. 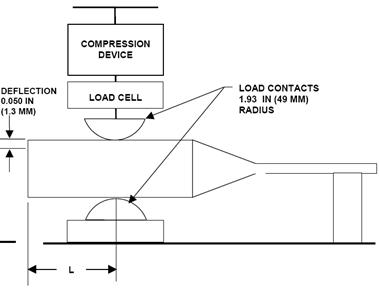