Swing speed refers to the effect that bat weight (or MOI) has on the speed a bat may be swung in play. It plays an important role in determining bat performance and must be found empirically.

It is readily understood that increasing a bat’s weight will lower its swing speed. It is not obvious, however, how much a given change in bat weight will change the swing speed. First one must determine which measure(s) of weight affect swing speed. There appears to be three schools of thought: bat weight, bat MOI, or a combination of the weight and MOI[e-h]. Bat performance is influenced by the swing speed. The ASA has conducted four field studies to better understand swing speed in the slow pitch (SP) and fast pitch (FP) game. The results of two of these studies (15 men and 36 women) will be reviewed below [i].

The swing speed field studies were designed using single-walled aluminum bats that were carefully weighted. Modern multi-wall and composite bats were not included in these studies. Modern bats provide enhanced performance and feel, but do not appreciably depart from the weight properties and swing speeds of single-walled aluminum bats. (The performance of modern bat design was observed in separate field studies.) Two groups of bats (SP and FP) had constant MOI, but varied in weight. Two other groups of bats had constant weight, but varied in MOI. A comparison of the bats used in the field studies is shown in Fig. 8.1.

Fig. 8.1. A comparison of bat weight and MOI of the swing speed field study bats.

Measuring swing speed is a challenging experimental task. A number of approaches have been employed and were considered including tethered sensors, radar, and light gates. A measurement was desired that would be minimally intrusive to the batter, yet accurately describe the swing speed. The studies were to be conducted in daylight on an outdoor playing field with a live pitch. This ruled out infrared cameras which are routinely used in batting cages with controlled artificial lighting. It also made light gates unsuitable as the bat-ball impact location varied widely with the batter and pitch. Optical high speed video cameras were found to have a sufficient field of view and resolution to track the swing speed, and were selected (Fig.8.2). They were placed above the batter so the batter’s natural swing was not impeded. Fiducial marks were placed on the bats which were subsequently tracked (frame by frame) in the video (Fig. 8.3). The bat’s center of rotation and rotational speed were extrapolated from the marker velocity vectors [j]. 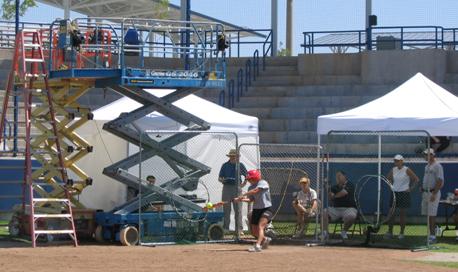 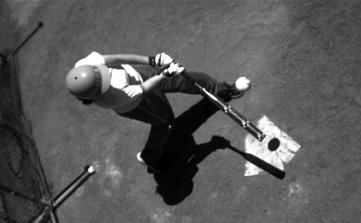 Fig. 8.5. Normalized swing speed as a function of bat MOI.

Fig. 8.6. Normalized swing speed as a function of bat weight.

To provide some insight of the effect of MOI on swing speed, an idealized model comparing the rotational swing speeds of two bats, w1 and w2, having differentMOI, I1 and I2, can be found as

The field studies were also used to compare the magnitude of the swing speed. The men’s slow pitch considered A and D batters from the 2002 National Championship, while the women’s fast pitch study considered NCAA Division 1, 2, 3, high school, and Olympic players from the 2004 National Championship. Both studies involved 34 inch long bats. Results of these groups are presented in Figs. 8.7 and 8.8, where the swing speed was reported at 6 inches from the end of the bat.