The coefficient of restitution (or COR) is a measure of the energy that is lost during impact. Balls with higher COR will be more lively in play. While it is close to 0.5 for most balls, it can range from 1 (no energy lost) to 0 (all energy lost).

The ball coefficient of restitution (or COR) is a measure of the energy that is dissipated from impact with a rigid surface. It is defined as the ratio of the rebound speed (vr) to the incoming speed (vi) as

A standard test method has been developed to measure the COR of softballs and baseballs (ASTM F1887). In this method a ball is pitched at 60 mph toward a steel plate mounted to a massive, rigid wall, as shown in Fig. 2.1. An image showing a ball impacting a flat plate is shown in Fig.2.2. The test is repeated six times, from which the average COR value is reported for each ball tested. A softball COR of 0.44 is perhaps the most common, but can be as high as 0.47 and as low as 0.40. TheCOR of baseballs is generally higher than softballs, exceeding 0.50. 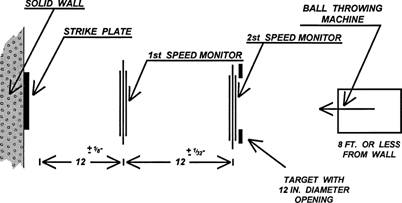 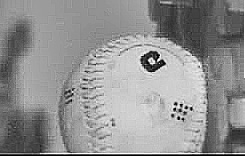 To describe the energy that is dissipated, consider a ball impacting a massive and rigid wall as described above. The ball COR is related to the fraction of dissipated energy, de, according to

This means that a typical 0.44 COR softball losses 80% of its initial energy upon impact with a rigid wall. 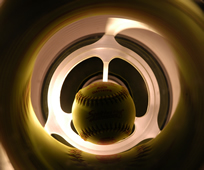 While laboratory tests have been developed to reliably and repeatably measure ballCOR, it should not be considered constant in the field, outside of laboratory conditions. In general, environments that increase ball deformation will reduce ballCOR. Balls become softer with increased temperature and humidity, for instance. These effects would tend to lower the ball COR. The same could be said for increased speed (Fig. 2.3) or impacting a cylinder (a bat as apposed to a flat surface). The ball COR should, therefore, be viewed as a useful measure to compare the liveliness of balls and not as an absolute measure of energy dissipated in a bat-ball collision.

Ball conditioning has become a topic of interest recently. In standardized tests balls are typically conditioned to 50% relative humidity (RH) at 72F. Balls will reach ambient temperature relatively quickly, on the order of a few minutes. Reaching ambient humidity can take considerably longer (two weeks), however, as shown in Fig. 2.4.