The following describes ways that bats may be altered to improve their performance beyond that allowed by the certification process. Most processes are designed to soften the barrel to magnify the trampoline effect. The methods are not allowed by regulating associations, and carry penalties if the perpetrators are caught.

Some enterprising individuals have found that bats may be modified (i.e. doctored) to increase their performance. While some claim that these treatments are allowed, every regulating association defines specific penalties for individuals or teams that doctor bats. The common doctoring methods involve painting, weighting, shaving, and accelerated break in processes as described below.

Painting involves taking a commercially available bat that is not certified for a desired league of play. The bat is painted to appear as a bat that is allowed under league rules. While this method is termed “painting” it typically involves adhesive decals and a clear coat. The decals are usually computer generated. They differ in quality but in general require skill and careful examination to distinguish from factory painted bats (Fig. 13.1). The decals are often slightly thicker than factory paint. Most painted bats still pass the common ring test used to identify dented metal bats. Some painted bats are sanded before the decal is applied to disguise the diameter increase from the decal. Most manufacturers track their bats with unique serial numbers. This allows painted bats to be identified at the factory, but provides little assistance for the umpire in the field. This method violates the copyright of both the bat manufacturer and the associations whose marks are reproduced. A number of bat painters have been successfully challenged using copyright law.

Fig. 13.1. Examples of factory produced bat and a painted bat.

Weighting involves adding or removing weight from the bat. This is usually done at the knob or end cap (Fig. 13.2). While many bat models are marketed in different weights, after market changes in weight are not allowed. The performance of most bats will increase with MOI. While the effect of MOI on performance is small, a high performance bat could exceed the performance limit with appropriately placed weights. Since bats are labeled at the factory by their weight, bats altered in this way would also be mislabeled in the field. 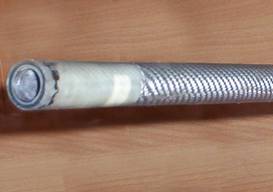 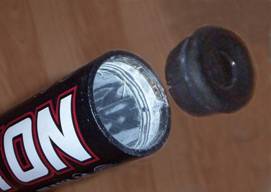 Shaving involves reducing the wall thickness in the barrel region of the bat. This is usually accomplished by removing the end cap and placing the bat in a lathe (Fig. 13.3). A boring bar is used to remove material from the inside of the bat. The end cap is then glued back in place. In some cases the concentric sleeves of multi-wall bats are separated, and given a similar thickness reducing treatment. Reducing the barrel wall thickness increases the trampoline effect, but also reduces bat durability. The latter characteristic places the batter under risk of being caught. In the event the barrel breaks open in play, the machining marks will be as apparent as a wood bat that has been corked. 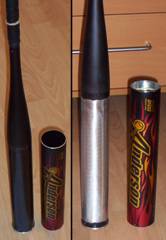 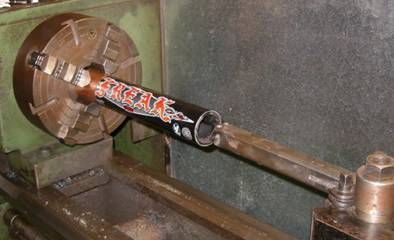 Fig. 13.3. Examples of metal and composite bats that have been shaved.

The material used to form composite bats involves a polymer (usually epoxy) reinforced with a fiber. The fibers are selected, placed, and arranged according to the bat’s design. Most bats are made from either glass, carbon or aramid fibers. Composites are generally stronger and lighter than aluminum and have comparable stiffness. The stiffness and strength of the polymer and fiber differ by large factors, however. When placed under load this can cause cracks to form. The formation of cracks is further enhanced with impact loading. Crack growth and coalescence makes a composite bat softer which can increase the trampoline effect. Bat manufacturers use toughened polymers to minimize crack growth with varied levels of success.

Some players have found that the performance of composite bats can increase with use. Accelerated break-in processes, which are unique to composite bats, are intended to manipulate this characteristic. All accelerated break-in processes involve deforming the barrel to levels exceeding that which occurs in play. Sometimes heat is applied to lower the magnitude of the force needed to produce the deformation. The simplest accelerated break-in method replaces the ball impact with a harder object. In some cases the bat is struck against a tree or telephone pole. A similar result is obtained by striking the bat with a mallet (Fig. 13.4). In both cases the bat impacts an object considerably harder than a softball. This increases the impact force and reduces the area over which it acts. The location of the damage induced by this simple treatment can also be controlled more accurately that would occur in play. 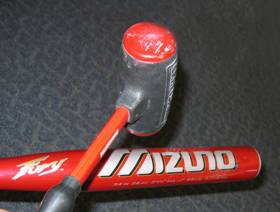 Fig. 13.4. Example of an accelerated break-in process involving a mallet.

Some will deform the barrel in a quasi-static fashion. It may be as simple as deforming the barrel in a vice at various locations along its length (Fig. 13.5). Some have machined platens that conform to the barrel and use a hydraulic press to deform it to controlled levels of load. The most prevalent form of bat doctoring involves placing the bat between polymeric rollers. The barrel of the bat is compressed between the rollers, and the barrel is forced through the rollers. 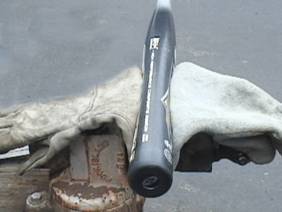 Fig. 13.5. Example of an accelerated break-in process involving a vice.

Some using accelerated break-in processes argue that their treatment has the same result as would occur to the bat in play. While both accelerated and natural break-in processes can soften the barrel of a bat, the damage the two treatments produce is quite different. The damage from naturally broken-in bats tends to be concentrated near the bat’s sweet spot, while for accelerated processes the damage is more evenly distributed over the entire length of the barrel. The performance of the barrel will increase with the area of softening, just as the spring of a diving board increases with length. The shape, size and location of cracks associated with damage are also affected by the loading rate. Accelerated break-in processes induce damage formations that would not occur in a bat that was only used in play.