Ball compression is a measure of a ball’s hardness. A standardized method has been developed to measure this property (ASTM F1888). The test apparatus is depicted in Fig. 3.1. The test involves measuring the force to displace a ball 0.25 inches in 15 seconds between flat platens. The ball is compressed twice, once along each “ear” axis. The compression for a ball is reported from the average of these two readings. 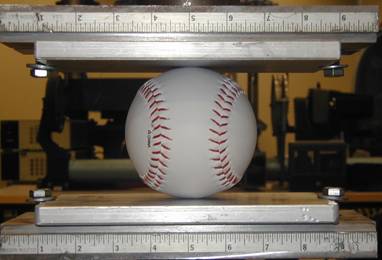 Ball compression decreases with increasing humidity and temperature. Laboratory tests are, therefore, conducted at 72°F on balls that have been conditioned at 50% RH.

The interest in ball compression is related to the so-called “trampoline effect” observed in thin-walled hollow bats[b]. The barrel of a hollow bat will deform during impact with a ball on the order of 0.125 inches. The barrel deformation is nearly elastic, returning most of its energy to the rebound speed of the ball. Recall that ball COR is measured from an impact with a rigid surface, and that energy loss increases with ball deformation. Now consider two balls of the same COR but made in a way that they have different hardness (or compression). Next allow these two balls to impact the same hollow bat. Upon impact the harder ball will produce more barrel deformation and consequently less ball deformation than the softer ball. Essentially the harder ball exchanges some of its ball deformation (which dissipates energy) with barrel deformation (which does not dissipate energy). It is for this reason that the batted ball speed generally increases with increased ball hardness and decreased barrel hardness. Note that the trampoline effect is negligible for bats with very stiff barrels. These may include hollow bats with thick walls or solid wood bats.

Because of the simple nature of this test, ball compression is used to compare the hardness of many types of balls. Some have noted that since the compression of a softball is larger than that of a baseball, softballs are not “soft.” Comparing the compression of balls of different diameter suggests a misunderstanding of the method and an incorrect application of the result.

To illustrate the effect of diameter on ball compression, consider an 11 and a 12 inch circumference softball ball made from the same material. Now consider their contact area with the loading platen after 0.25 inches of displacement. The contact areas would be approximately 1.33 and 1.45 in2 for the 11 and 12 inch ball, respectively (a larger ball produces a larger contact area). The spherical shape of the ball means that most of the deformation will be concentrated near the platen (increasing ball diameter away from the platen results in less deformation toward the ball center). This means that the pressure over the contact areas for the two balls will be similar. The ball compression is the product of the pressure and the contact area. For this idealized case, one would expect the compression of the 12 inch ball to be 9% higher than the 11 inch ball, even though they are made of the same material. For the 12 inch ball to be truly harder than the 11 inch ball, its compression would need to be more than 9% higher than the 11 inch ball. 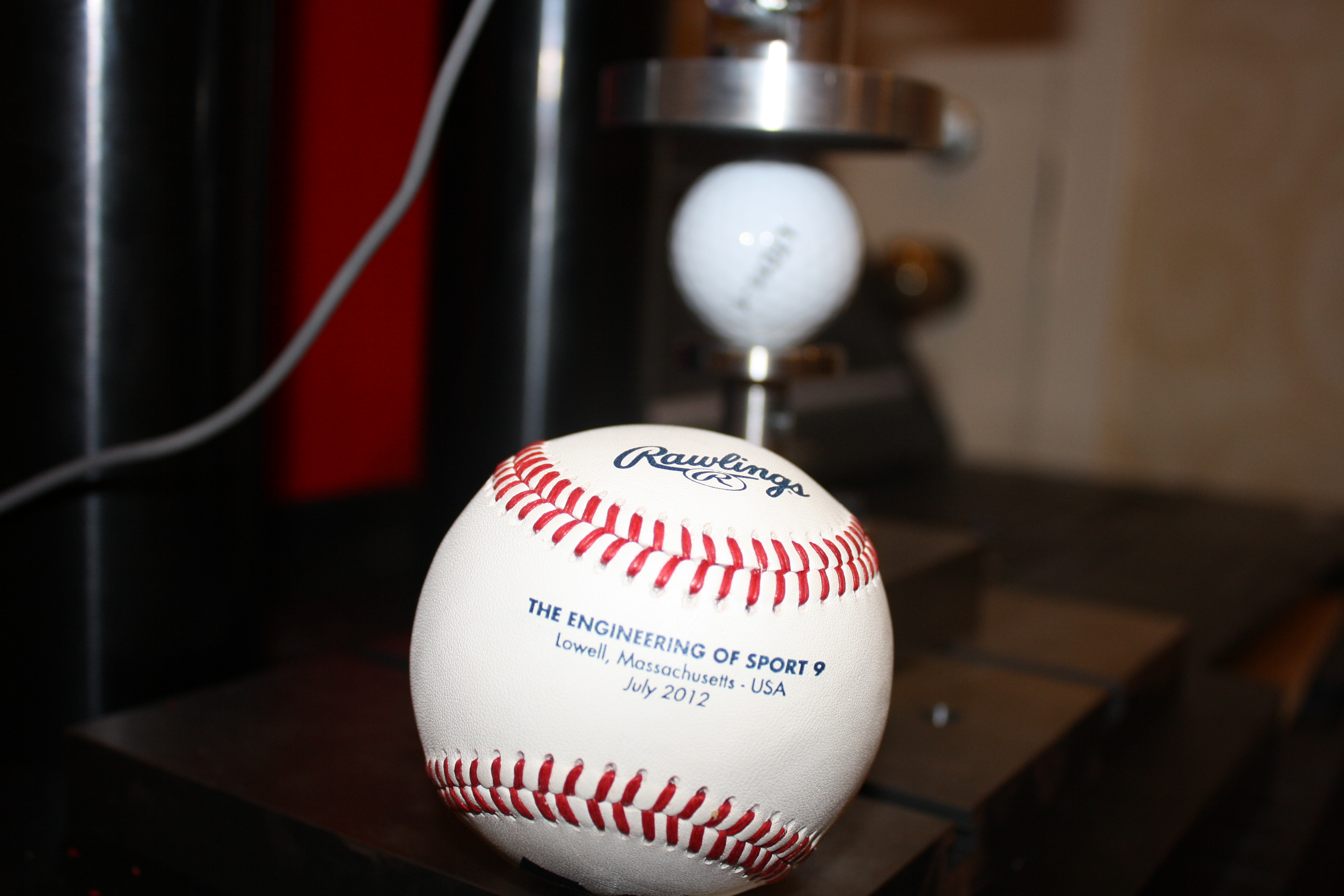